Faux Controversy by MSM: Workers at NWS 'disgusted' at their NOAA for 'throwing them under bus' and backing Trump's claim that Dorian WAS headed for Alabama 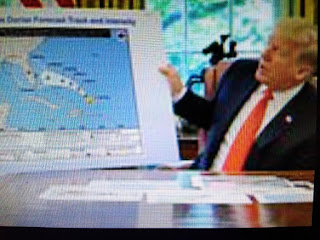 This might be the most ridiculous Trump controversy since he's been president.
Hate for Trump by deranged leftists working  in government is so strong they want to hold him responsible for bad information given to him.  This hullabaloo isn't about Trump at all.  It  points to the fact of how difficult it is to predict with certainty where a hurricane will land in a short matter of days.  Yet, where suppose to believe these same clowns who project the effects of climate change decades into the future?


Daily Mail reports workers in the National Weather Service are 'shocked, stunned and irate' at their bosses in the National Oceanic and Atmospheric Administration for backing Trump up and claiming that he was right to say Hurricane Dorian was headed for Alabama.

In a string of baffling developments now known as 'Sharpiegate', the row centers on the president's September 1 tweet that the brutal storm was likely to hit Alabama 'harder' than expected.  The NWS Birmingham office quickly issued a tweet to insist the state was not in the storm's path.

Trump then defended his statement and insist it was based on early information that had been given to him by scientists. At an Oval Office press conference on September 4, he held up an August 29 map of the storm's path to prove his point.

That map showed the storm's path as heading towards northern Florida and parts of Georgia. The original one, which had been issued by the NOAA, did not show Alabama being but the one Trump held up had the state circled in black sharpie.