'Hunter you are a loser, why did you get $1.5 billion dollars?' Trump goes after the 'crooked' Hunter Bidens who 'got rich while America got robbed' and says 'stupid' Joe Biden was only ever good at kissing Barack Obama's a** 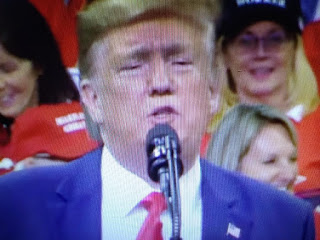 Trump was on fire at Minnesota rally!  He laid out his case for re-election and destroyed the Democrats in the process.

Daily Mail reports Donald Trump raged against Joe and Hunter Biden at his first campaign rally since the impeachment inquiry began, calling the former vice president an a** kisser and describing his son as a 'loser.'

'He was only a good Vice President because he understood how to kiss Barack Obama's a**,' he said of Biden as the crowd cheered and roared.

The president didn't hold back in a fiery, 102-minute speech to the packed Target Center in Minneapolis, Minnesota, where he mocked the intelligence and business capabilities of Hunter Biden.

'Joe's son Hunter got thrown out of the Navy and became a genius on Wall Street in two days. Whatever happened to Hunter, where the h*** is he? Where is Hunter? Fellows, I have an idea for a new t-shirt? I love the cops, but let's do another t-shirt. Where is Hunter? Where is he?,' Trump said.