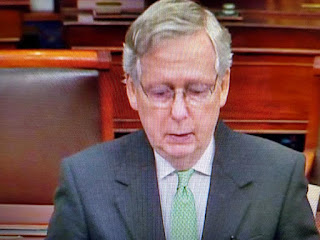 Sen. Chuck Schumer knows damn well the Democrats have no case for impeachment.
The Dem party as being run by AOC and the party leaders can't stop their implosion.

"The Senate is meant to act as judge and jury, to hear a trial, not to re-run the entire fact-finding investigation because angry partisans rushed sloppily through it,” he said on the Senate floor.

In a Sunday letter, Senate Democratic Leader Chuck Schumer had called for the chamber to subpoena new documents and call witnesses who had been blocked by the White House during the impeachment inquiry on the House side.

McConnell, R-Ky., claimed that such investigative steps, though, were part of the House role -- not a mission for the Senate. He warned that entertaining Schumer’s proposal to do House lawmakers’ “homework” could invite a string of future “dubious” and “frivolous” impeachment inquiries