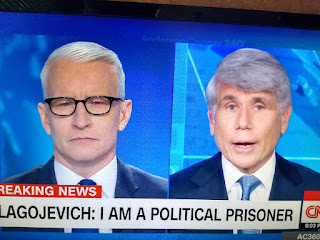 Anderson Cooper gets away with a lot for obvious reasons.  He's part of a protected group, along with Don Lemon, that never comes under scrutiny for their want of practicing good journalism.
His skills are very lacking, in my opinion.  What he does well is go after who his corporate minders tell him to.  In this case Rod Blagojevich, former governor of Illinois, who used to bea big deal until he across Barack Obama.

Cooper is defending a corrupt federal justice system.  The same system to let Hillary Clinton get away with breaking numerous laws.

The same DOJ that tried to overthrow the election of President Trump!

Cooper is a vile person that I hope gets his someday in the future.  Blagojevich got convicted for the criminalization of politics.  Every governor, mayor, congressman does the same thing he did on a daily basis. Quid Pro Quo is done by EVERYONE in the world.  There's nothing criminal about it.  Nevertheless, the DOJ is corrupt with a 97% convection rate.  Any one of us is vulnerable.  And for Anderson Cooper to mention an "alternative universe of facts".  What?  That's what CNN does 24/7!  It's why NOBODY watches their garbage.