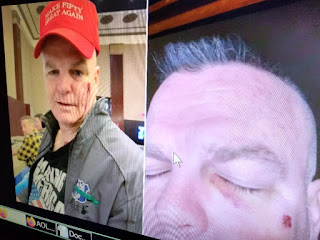 This is insane!
Put the blame on the mainstream media for driving people crazy with their non-stop Trump hatred.

NY Post reports a former NYPD detective says a woman punched him in the face in Nashville over the weekend because his hat looked like a MAGA cap.

Staten Island resident Daniel Sprague told the Post he was celebrating his 50th birthday with his wife and friends at The Stage on Broadway on Friday when he was assaulted by a woman he didn’t know.

“I was outside with my friends when some grabbed me from behind, spun me around and punched me in the face,” said Sprague, who retired from the NYPD in 2009.

At first I thought it was a friend until I got hit. I couldn’t believe someone could get that upset.