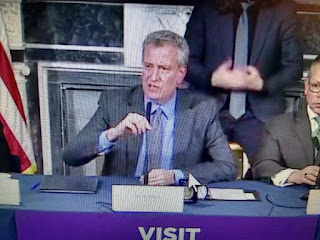 There's only one purpose why these Draconian measures are taking place.  Mayor De Blaio announced that New York City is in a state of emergency
to deal with the spread of corona virus.

He went on to mention the redeployment of 100,000 thousand municipal employees. But, the following is a pull quote of his announcement

NY Post reports Mayor Bill de Blasio on Thursday declared a state of emergency over the spread of the deadly coronavirus and predicted that New York City would have 1,000 confirmed cases by next week.

“It’s going to get a lot worse before it gets better,” he warned during a City Hall news conference.

De Blasio warned that he expects the crisis to last at least six months, with more time needed to recover.

“This will not be over soon. It’s going to be a long, tough battle,” he said.

De Blasio said he agreed with Gov. Andrew Cuomo’s decision to close all places with legal occupancy of 500 people or more — including Madison Square Garden and Barclays Center — and to slash the occupancy of smaller places in half.

De Blasio said he “won’t be surprised” if the move forces some businesses to close, but said, “These are the rules we will enforce from now on.”