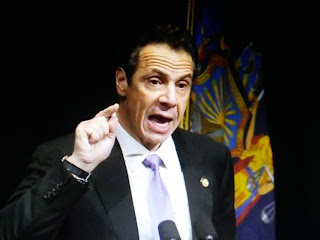 What Democrats outside of New York don't realize is that Andrew Cuomo comes with a lot of baggage.
His policies alone are enough to sink his candidacy for VP on up.  Yes, he's a good talker.  But, that's all he is.

New Yorkers are leaving the state in droves because of oppressive taxes.  Cuomo signed the Baby Born Alive Act-allowing for the abortion of children who survive abortion attempts.  He signed NO Bail Law-allowing criminals to go free after they commit their crimes.  And that only for starters.  There's a boatload left that would raise the hairs of every American outside of New York!

People close to Gov. Andrew Cuomo certainly think so and are engaging in a furious behind-the-scenes campaign to tout his leadership during the COVID-19 outbreak and appeal to Team Biden, insiders say.

“Biden bundlers have told me that they are feeling pressure from Cuomo’s orbit to, at the very least, have the vice president bring him up in complimentary ways regarding his handling of the crisis,” said one New York Democratic operative regularly in touch with big Biden donors. They seek to “keep the dust up” and “generate a positive whisper campaign” — potentially even netting Cuomo a spot on the 2020 Democratic ticket with Biden.