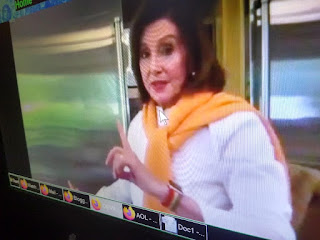 This is such a great by Trump.
Pelosi I think is just as senile as Joe Biden.  A top politician would know what she did was very bad politically.  It just shows Nancy has lost a great deal on her fastball.

Gateway Pundit reports This was brutal.

The Trump campaign released a hard-hitting anti-Pelosi ad on Monday.

Millions of Americans are now unemployed and standing in line at food banks because Pelosi wasted time trying to ram illegal ballot harvesting, federal funding for abortion and climate change related provisions in the Coronavirus bill.

Americans are losing their jobs since the virus rocked the economy.

Nancy Pelosi blocks funding for people to keep getting paychecks.