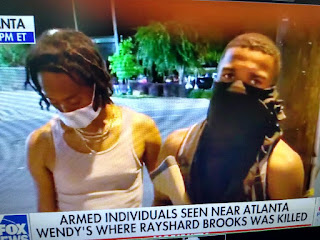 It's getting out of hand in Atlanta!
And what is Atlanta  Mayor Keisha Lance Bottoms doing about it?  Nothing!  This is what Democrat leadership does.  It’s no different than Seattle, Minneapolis,  and New York.  Democrats want the chaos because they think it gives them more power.

Fox News reports At least three men brandishing long guns -- seen Tuesday night near the Wendy's restaurant in Atlanta where Rayshard Brooks was fatally shot during his arrest earlier this month -- told Fox News that police were no longer allowed in the area.

One man, who said he was holding a 12-gauge shotgun, told reporter Steve Harrigan he was armed because there were no longer police officers to protect them.

Another man said he lost confidence that the city's police were committed to their pledge to “serve and protect.”