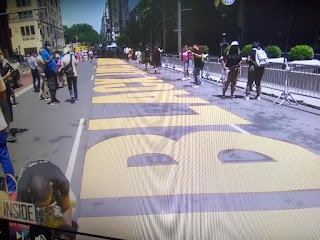 Bill de Blasio and the other woke-idiots like his wife and Al Sharpton need to learn the laws of physics.
For every action in the world there's an opposite and equal reaction.  That's what is happening at all these BLM murals pained by these losers.

NY Post reports the giant new “Black Lives Matter” sign in front of Trump Tower has become a flashpoint for protesters clashing over the statement.

On Saturday — just two days after Mayor Bill de Blasio was jeered as he helped paint the large yellow mural — there were further ugly confrontations as dozens of “All Lives Matter” counter-protesters descended on Fifth Avenue, photos and video show.

As the group unveiled several flags, including “thin blue line” ones showing support for law enforcement, an opposing protester raced over and swiped a flagpole — almost starting a brawl, video showed.

“You feel big and proud over that?” someone asked the flagpole stealer, who replied,