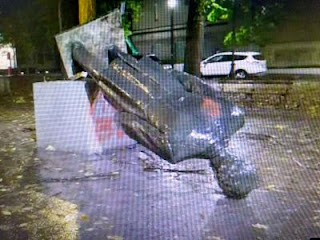 These people need to be rebuked by the American people on Election Day.

Tearing down statues will not stand in a country based on freedom.  This isn't Soviet Russia!

Orange Live reports a group of protesters toppled statues of former presidents Theodore Roosevelt and Abraham Lincoln and shattered the entrance to the Oregon Historical Society in Portland’s South Park Blocks late Sunday before moving into other areas of downtown, smashing storefronts and engaging in other acts of destruction.

Police declared the event a riot and ordered people rampaging through the city’s streets to disperse but did not directly intervene until nearly an hour after the first statue fell. The crowd scattered when police cruisers flooded the area, and officers in tactical gear appeared to make several arrests.