Get a life, please! Amazon changes app logo because complainants it reminded people of Hitler's mustache 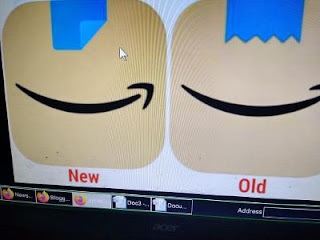 I could look at the old loge for a hundred years, and never, ever, would I think it reminds me of Hitler's mustache,  Wow!

That really says a lot about the people who complained about it.  And Amazon makes it worse by reacting to it and changing the logo.  So, I'm sure others out there will see something else in the new logo that "normal people" don't see.

Amazon had recently changed the logo or phone app symbol. The new app logo has a brown box, that resembles a packaging box with an adhesive blue strip, appears to be a tape above its signature arrow symbol.

However, within weeks after Amazon changed its app symbol, some users critcised that the blue strip above the arrow symbol resembles Adolf Hitler's moustache.