Harry, you never should have married HER! My take on Meghan Markle and Prince Harry Oprah interview 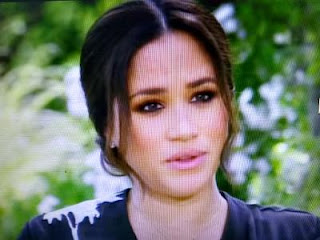 I didn't watch the interview.  But, looking at the NY Post this morning for a story I can blog about, I see four articles about the interview and wondered what the heck is going on?

That didn't take long to find out.  I didn't need to see the interview to realize it was all about--racism!

Nothing ever changes with these fucking leftists! Every freaking thing is about racism.  The script never changes.

He was the cool brother of Princess Diana's two boys.  He never had a shot of becoming King being that he used to be third in line. Now, he's further back after his father, Prince Charles, his brother Prince William, followed by William's kids jumping in front of Harry.  Nobody pays attention to the seventh to the throne.

That was Prince Harry!

However,  Harry gets to do what he wants with a lot less scrutiny.  He gets to be Derek Jeter without having world class talent.  So women were willing to fall at Harry's feet anyway.  He's a royal after all.   So, with all that talent at his feet, he chooses to marry Meghan Markle!  Why, I don't know?  She's cute.  But, he dated prettier.  Whatever!

It was a bad choice from day oen!

Meghan Markle should have known better.  Marrying into the Royal family isn't always peaches and gravy.  Look at what happened to Princess Diana.  In the end , Prince Harry looks like a punk being bossed around by a yet another leftist claiming she's a victim of racism.  It's the same old tired song that gets played over and over again.  The Royal Family is White!  So, of course they have to be racist.  Can we please change the record, the CD, the MP3, you kmow what I mean?: