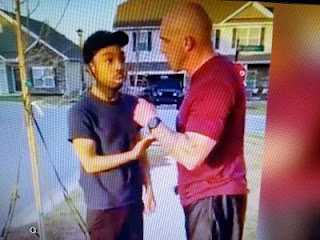 There are aspects of this story I'm still not clear on as far as chorology.

However, this kind of crap, publicity stunt, is what BLM is known for.  They don't accomplish anything else other than free pub for the suck-up media to latch onto.  Are they doing anything to help the Black community?

NY Post reports dozens of Black Lives Matter protesters rallied outside the South Carolina home of a soldier charged with assaulting a black man in a now-viral video.

Videos showed a large group holding BLM signs and shouting through a megaphone Wednesday as they stood in the street outside 42-year-old drill sergeant Jonathan Pentland’s home just outside Columbia.

“I’m on your yard!” one woman was seen shooting directly at the house believed to belong to Pentland, who went viral for confronting a black man and telling him he was in the “wrong neighborhood, mother f–ker.”

“We just want to talk, we want to understand some things, that’s it,” she shouted in the video, as others said, “No justice, no peace!”