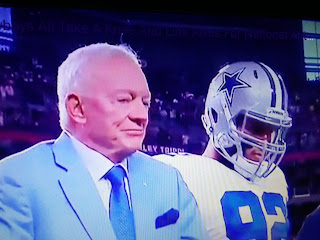 Colored people?  If anybody were to use that phrase "colored" today they would feel the wrath of Leftism come down upon them like Hurricane Maria.
Yet, this organization exists for what again?  Oh, that's right, a rubber stamp for the Democrat Party and nothing else.


Dallas Morning News reports the National Association for the Advancement of Colored People (NAACP) issued a response to Jerry Jones on Tuesday after the Cowboys owner said he'd sit players who don't stand for the national anthem.

"This is not an issue about our flag, this is an issue about police brutality, racism, and the ability of members of the NFL whose communities are disproportionately impacted by police misconduct to peacefully say enough," said NAACP interim President and CEO Derrick Johnson. "This is not simply a Black issue due to the number of white people also killed by police, but we know historically that when justice occurs for African Americans, all other members of our society benefit as well."