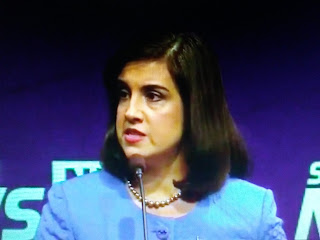 This was the most tilted debate I've ever seen.  The moderator the panel, and the audience was heavily stacked in favor of Bill de Blasio.
It wasn't even close.

However, Nicole Maliotakis more than held her own and for those who are not familiar with her, she got noticed tonight.  Is it enough to defeat De Blasio?  I don’t know.  But, I do know this.  There's a huge amount of dissatisfaction with the mayor.  If Maliotakis can continue to present herself as credible choice, Bill may be in for a shock on Election Day.

NY Times reports in the first general election debate of his campaign for a second term, Mayor Bill de Blasio, a Democrat, faced off Tuesday against Assemblywoman Nicole Malliotakis, a Republican, and Bo Dietl, a former police detective running as an independent on the Dump the Mayor line.

Here are the highlights:
• The debate spiraled out of control on several occasions, both for the candidates on stage and the moderators, as a raucous crowd cheered, booed, hooted and hollered.

NY1’s Errol Louis paused the debate and threatened that security officials would be escorting misbehaving audience members to the “sidewalk.” That threat appeared to be carried out moments later, as at least one person was ejected. None of the candidates were removed, although Mr. Dietl’s microphone was cut off at least twice.

• All three candidates got to ask one question to a rival. Ms. Malliotakis asked the mayor why he traveled to Germany not long after the death of a police officer, a train derailment and a report on growing homelessness over the summer.

“What kind of person are you, what kind of mayor are you that you would leave your city at a time like that?” she asked.


He disagreed with her premise, saying he spent time with the fallen officer’s family and at the hospital.

Mr. de Blasio asked her why she supported Mr. Trump last year. She came prepared with a retort, if not an answer. “Mr. Mayor, this election is not about Donald Trump. This election is about you,” she said, accusing him of trying to “deflect from your lousy record.”