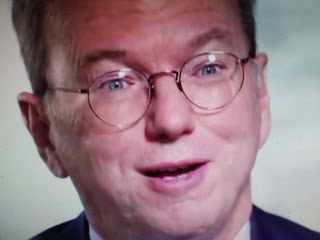 This guy wouldn't be stepping down if it weren't for the sexual harassment mania going on.
Well, at least he isn't Gay.

The 62-year-old tech tycoon — who, according to Google co-founder Sergey Brin, was originally tapped as CEO in 2001 to provide “adult supervision” for himself and Larry Page — said in a statement that he will remain at Alphabet as a “technical advisor.”

“In recent years, I’ve been spending a lot of my time on science and technology issues, and philanthropy, and I plan to expand that work,” Schmidt said.

One source close to Schmidt said the move would allow him to have a more “hands-on role” in developing artificial intelligence for defense.

Schmidt has also been spending more time on his foundation, which focuses on sustainability, the source said.

But the timing of Schmidt’s sudden move — along with the fact that Alphabet waited three days to disclose that Schmidt had told the company he was stepping down, according to a filing — raised questions.

Schmidt is a known womanizer despite being married for 37 years to Wendy Schmidt, who said in 2012 they started living separate lives because she felt like “a piece of luggage” following him around the world.