She still doesn't get it: Hillary admits her husband Bill's tarmac meeting with AG Lynch was a 'bad look' 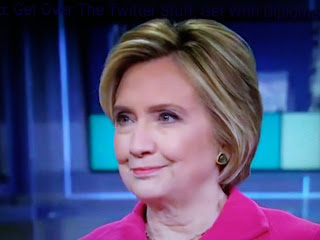 Hillary Clinton is as dense as Jennifer Lawrence, and that's quite an achievement.
That tarmac meeting was mega-unethical!  Bill Clinton gave Loretta Lynch her marching orders not to indict his wife Hillary.  Let's not pretend that wasn't the real deal.

The former presidential candidate spoke to PBS while promoting her new book 'What Happened.'

She has blamed many factors for why she lost to President Donald Trump, including but not limited to Facebook, former FBI director James Comey and the Electoral College.

But Clinton 'rejects' the notion that Bill's meeting with the attorney general who was investigating her emails cost her the election.

She admitted it was a bad look and blames Comey above Lynch.