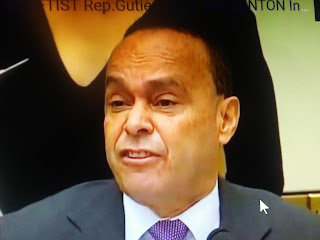 Luis Gutierrez has as much chance of becoming president as Kim Kardashian.
The man is a joke!

Breitbart reports Rep. Luis Gutierrez (D-IL) reportedly told “dozens” of amnesty advocates at a San Diego, California, rally for Deferred Action for Childhood Arrivals (DACA) over the weekend that he is considering running for president in 2020.

At the rally, which was originally scheduled for Friday but held on Saturday, Gutierrez told the “dozens” of activists of his potential presidential ambitions while calling on President Donald Trump to secure the future of so-called Dreamers as seriously as the administration wants to protect the border, according to CBS8 in San Diego.

Luis Gutierrez is the congressman who walked out of the state of the union during the U.S.A, U.S.A. chant.  That's what he thinks of his own country.  And this clown thinks he can be president?
at February 13, 2018