At least I didn't have a boss who told me to kill it!' Elizabeth Warren's jaw-dropping attack on Mike Bloomberg over claims he urged a pregnant employee to get an abortion 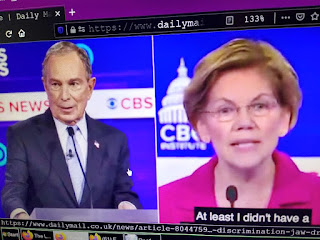 Bloomberg is spending millions to overcome the boatload of gaffs he's made in the past.
He's a billionaire version of Joe Biden.

Daily Mail reports Elizabeth Warren went after Michael Bloomberg again on the Democratic debate stage - this time bringing up an allegation that he had reacted badly when a female employee told him she was pregnant.

'At least I didn't hgave a boss who said to me, "Kill it!"' she declared, telling the audience how pregnancy discrimination was personal for her, and floating that Bloomberg was previously guilty of it.

Bloomberg pushed back against the accusation vehemently and complained that he had already given in to Warren's demands, only to have the senator prey on him again.