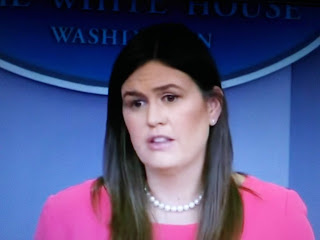 All day the corrupt  media complex did what they do best--distort the facts and lie to the American people.
Thankfully, there's an alternative media that's happy to point out their dishonesty.

CNS News reports after a reporter asked why President Donald Trump yesterday described "some immigrants" as "animals," White House Press Secretary Sarah Sanders confimred that Trump was "clearly referring to MS-13 gang members" and that his term "animal" did not go far enough, and she hopes that he will do all he can to "stop these types of horrible, horrible, disgusting people."
At Thursday's press briefing, CBS's Steven Portnoy said, “I just want to ask you because so many people around the country have been talking about it in the last 24 hours. What did the president mean when he said some immigrants are not people, they’re animals?"