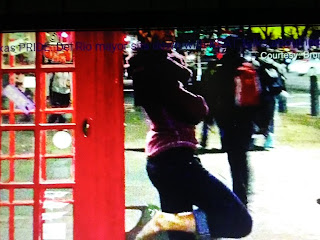 Welcome to the Freakshow in the heart of Texas!

Connecting Vets reports his high heels are between three and four inches tall.  They’re patriotic heels with an Americana theme.  They are your basic, bedazzled-flag high heels made to fit a male veteran’s foot.
Google Mayor Bruno “Ralphy” Lozano of Del Rio, Texas and a good chunk of the headlines you’ll find mention that Mayor Lozano wore heels in his city’s last Veteran’s Day parade.  The headlines also tell you that Lozano is the youngest mayor elected in his town’s history, he’s a flight attendant, gay and a veteran.
Lozano was one of 52 LGBTQ candidates who ran for office this year in Texas.   “I just advocated this is who I am,” says Lozano.  “I didn’t use the LGBT flag in my campaign.  I don’t have that kind of community.  We don’t have a gayborhood.  A part of me is gay.  A part of me is a human being who cares for the community.”