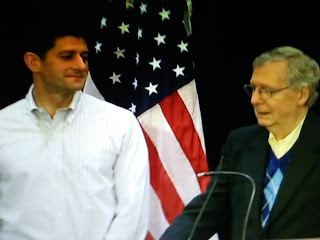 Mitch McConnell and Paul Ryan continue to be weak leaders afraid of their own shadows and what the media says about them.
They don't have President Trump courage to stand up and fight for what's right.  Instead they give in to the Democrat agenda and pretend that they're not.

Business Insider reports President Donald Trump on Thursday once again attacked the legislative leaders of his own party on Twitter, this time about the debt-ceiling negotiations.

In his tweet, Trump said he asked House Speaker Paul Ryan and Senate Majority Leader Mitch McConnell to attach legislation to raise the debt ceiling to a recently passed bill overhauling the Department of Veterans Affairs.

The logic behind this would be to pressure members, especially conservative Republicans opposing any "clean" debt-ceiling hike, into voting for the limit increase.
Trump said the leaders declined.

"I requested that Mitch M & Paul R tie the Debt Ceiling legislation into the popular V.A. Bill (which just passed) for easy approval," Trump tweeted. "They didn't do it so now we have a big deal with Dems holding them up (as usual) on Debt Ceiling approval. Could have been so easy-now a mess!"