America's team No More: Jerry Jones kneels with Cowboys while the crowd booed in pre-anthem statement 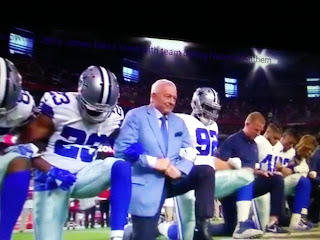 The Cowboys then retreated to the sidelines and locked arms again during Jordin Sparks’ rendition of the anthem. The Arizona Cardinals also locked arms during the anthem in a show of unity.

The ownership of “America’s Team” told ESPN they were taking a knee “as a statement of equality and representation of unity.”