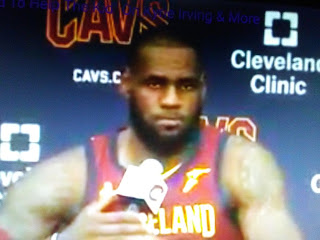 LeBron James chose to go in the political realm by calling President Trump, "a bum!"
That's a personal attack that has nothing to do with Trump's policies. As such James has invited upon himself a backlash that in certain respects can be very ugly.

"I received voicemails after LeBron tweeted that were some of the most vile, disgusting, racist," Gilbert told CNBC Friday. "There's an element of racism that I didn't even realize existed in this country this much."

Lesson to Athletes: Just play your sport that is paying you millions.  Leave the politics alone until after you retire because if you engage while you're playing, you'll enrage half of the fan base and it's not worth the trouble.
at 9/30/2017 07:15:00 PM