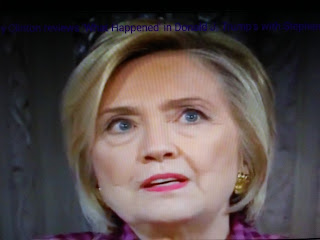 We've already seen Crooked Hillary get away with breaking numerous and more serious federal laws with the help of James Comey and Loretta Lynch.
It is doubtful,  in my opinion, that she will be held to account for these latest allegations.  But, the country and the world is seeing all that is transpiring now and in the court of public opinion, she's guilty as sin!


Washington Times reports Hillary Clinton’s campaign and the Democratic National Committee violated campaign finance law by failing to disclose payments for a dossier on Donald Trump, according to a complaint filed Wednesday with the Federal Election Commission.

The complaint from the nonprofit Campaign Legal Center said the Democrats effectively hid the payments from public scrutiny, contrary to the requirements of federal law. By law, campaign and party committees must disclose the reason money is spent and its recipient.

“By filing misleading reports, the DNC and Clinton campaign undermined the vital public information role of campaign disclosures,” said Adav Noti, senior director of trial litigation and strategy at CLC and a former FEC official. “Voters need campaign disclosure laws to be enforced so they can hold candidates accountable for how they raise and spend money. The FEC must investigate this apparent violation and take appropriate action.”