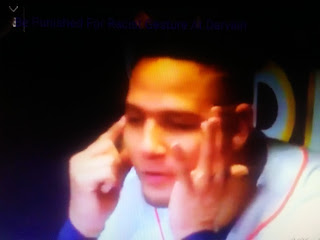 I didn't see the game last night because I was at a wedding.  But, I can see the Snowflake generation being besides themselves over this.
What Yuli Gurriel did was the equivalent of trash talking.  There's no such thing as "nice" trash talk.  Nasty things are said during the heat of battle to get into the other player's head.  In this case a gesture meant to mock the opposing pitcher.  We as a society are much too sensitive about everything. We're not growing up anymore and learning how to deal with life as adults. Instead we're encouraged to stay in perpetual childhood and expect others to keep the reality of the world away from hurting our feelings.

NY Post reports Astros first baseman Yuli Gurriel will be suspended for the first five games of next season — but not during the World Series — after his racist gesture in the dugout during Game 3, USA Today reported Saturday.
MLB commissioner Rob Manfred confirmed the decision, and offered his rationale for postponing the punishment until the 2018 season.
“I’ve decided on that timing for four reasons,” Manfred told reporters. “First of all, I felt it was important that the suspension carried with it the penalty of lost salary. Secondly, I felt it was unfair to punish the other 24 players on the Astros’ roster. I wanted the burden of this discipline to fall primarily on the wrongdoer. Thirdly, I was impressed in my conversation with Yu Darvish be his desire to move forward, and I felt that moving this suspension to the beginning of the season would help in that regard. Last, when I originally began thinking about the discipline, I thought that delaying the suspension would allow the opportunity to exercise his rights under the grievance procedure. It now appears, and I have every expectation, that he will not be exercising those rights.”