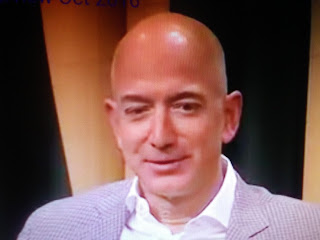 Jeff Bezos has a lot of explaining to do concerning one of his top executives and how he was aloud to operate.

Daily Mail reports McGowan managed to speak out and help take down a powerful executive who, the actress claims, refused to believe that she had been raped because she could not provide him with any proof.

Amazon announced on Thursday evening that Roy Price is 'on leave of absence effective immediately' from the company, less than three hours after McGowan took aim at the 51-year-old executive on Twitter.

The 44-year-old actress, who is one of Harvey Weinstein's more than 30 victims, stated on Twitter that Price had said her rape claims were not credible when she tried to advise him against bailing out Weinstein's company.

He responded by killing the project she was developing for the streaming giant claims McGowan.
Soon after that revelation, a lesbian producer came forward to share her story, stating that in 2015 Price made a number of inappropriate remarks to her while on a business trip at Comic Con, even telling the woman at one point: 'You will like my d***.'

That woman immediately reported his actions and said she has not seen him since, but this appears to be the first time his is being placed on leave by Amazon.