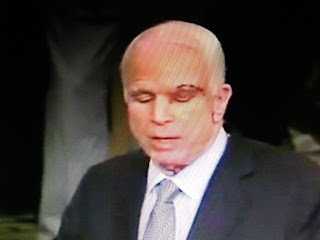 John McCain will stop at nothing to screw President Trump and the American people for his own petty reasons.
Not even brain cancer will stop him.

You Blog Club reports it’s a specter that should stalk the nightmares of Republican leaders: a Senate chamber, packed on Christmas Eve, as lawmakers gather to decide the fate of a tax package that will shape the GOP’s political fortunes. The bill remains one vote shy, and then Sen. John McCain walks in, pauses before the desk, and delivers his second thumbs-down dagger of the year.

For that reason, the Arizona Republican, who is fighting a public battle with brain cancer, will be among his party’s most closely watched as the year winds down and the tax debate gears up. Yet over his decades in public life, McCain has traced a zigzagging line on the subject, leaving little clear indication of how he’ll approach a potentially decisive vote. A look at the senator’s record on taxes shows that three things seem most important to him: public debate, some help for the middle class, and not exploding the deficit.