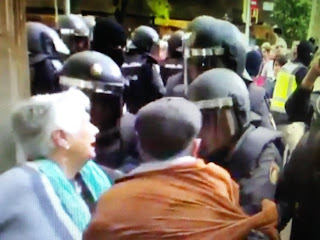 Catalonia is the productive part of Spain with the highest GDP and they're tired of supporting the rest of the welfare state.
Can you blame them?

At least 38 people were injured in the clashes, along with another 11 policemen, officials said.
More than 5.3 million people have been called upon to have their say on independence from Spain in the wealthy northeastern region which has its own distinct language and culture.