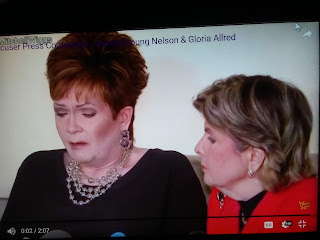 In my opinion, this is a replay of the Herman Cain playbook whereby sad women come out the woodwork making false and outlandish accusations.
Gloria Allred?  The world knows what kind of lawyer she is and the lowly salacious kind of law she practices.  She doesn't deserve the benefit of the doubt either, in my opinion.

Another simple observation that this woman is lying.  If this event truly happened, then why does she need to read from a document?   Just say what happened.  You need a piece of paper to say what happened.  But, if this is all made up you would need a script, right?  As far as Roy Moore signing her high school yearbook?  Gimmie a break!  That's not prof.  A judge would laugh that out of court.  She could have signed that herself.  Gloria Allred or Lisa Bloom could have signed it.  How do we know?   In my opinion Beverly Young Nelson is a fraud.

CBS News reports a new accuser of Republican senate candidate Roy Moore has stepped forward Monday with allegations that Moore assaulted her when she was a minor in Alabama.

Famed women's rights attorney Gloria Allred held a press conference in New York City with the woman, Beverly Young Nelson, to announce the accusations, who "wishes to state what she alleges Roy Moore did to her without her consent" according to a press release from Allred.

Moore has since condemned allegations, first reported in the Washington Post, that he assaulted a 14-year-old girl when he was 32 years old as "fake news."
He also has pledged to sue the Post for its reporting, as several U.S. GOP senators, including Senate Majority Leader Mitch McConnell, are calling for him to drop his candidacy.