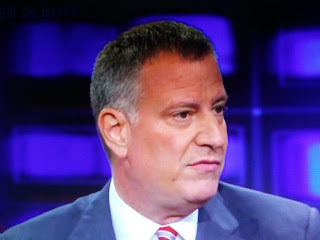 Well, New Yorkers are stuck for four more years with the most corrupt mayor in New York City history and they have nobody to blame but themselves.
I tried to warn you guys but I guess you don't mind the increased homeless, you don't mind the smell of urine and feces in the air, and you don’t mind a mayor with his hand out for big money donors to do favors while the little guy gets screwed.  So take a good whiff New York, this is the New York you voted for.


The Hill reports New York City Mayor Bill de Blasio has been reelected to a second term in office.

Polls ahead of voting on Tuesday projected a sweeping victory for de Blasio, a progressive Democrat who was first elected in 2013. His Republican opponent, New York state Assemblywoman Nicole Malliotakis had long lagged behind de Blasio in the polls.

In his second term in office, de Blasio will be expected to push forward with a plan to offer free preschool to all three-year-olds, as well as forge ahead with an effort to preserve or create affordable housing across the city.