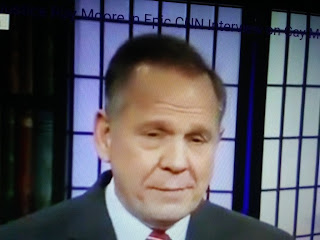 Judge Moore flatly denies these scoreless, politically motivated allegations a month away from the special election for a Alabama senate seat.
It's crystal cleat obvious what's going on here.  Alabama voters won't fall for this cheap dirty trick that no longer works in the 21st century.

Mediaite reports Roy Moore is continuing to deny the blockbuster allegations that he pursued relationships with four teenage women while he was in his 30s.
“It never happened,” Moore said Friday on The Sean Hannity Show
In his first interview since the Washington Post published the explosive claims, Moore — the Republican nominee for the U.S. Senate in Alabama — appeared on Sean Hannity‘s radio show Friday. The former Alabama Supreme Court justice told the host that
“These allegations are completely false and misleading,” Moore said. “But more than that, it hurts me personally because, you know I’m a father. I have one daughter. I have five granddaughters. And I have a special concern for the protections of young ladies. This is really hard to get on radio and explain this. These allegations are just completely false.”