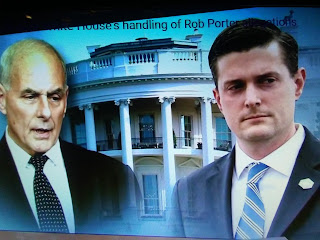 Let's get real here.  Nobody ever heard of Rob Porter but for a few days ago.
But thanks to the underhanded machinations our mainstream media, he's become the latest poster boy for the bogus #MeToo and #TimesUp movement.

In two more months, #MeToo and #TimesUp will be as relevant as #OccupyWallStreet and #BlackLivesMatter.  Remember those movement that came and went?

However, the sins of James Comey and Loretta Lynch will still be right there for public scrutiny.  Using a made up out of whole cloth dossier to obtain a FISA warrant is a crime that cannot be swept under the rug.

And as much as the mainstream media may divert, distort, disparage, ignore to protect the Democrat Party, there's  real journalism going on in the alternative media.  There's nothing earth shattering about Rob Porter.  Don't believe the frenzy of #Times Up mania whereby allegations are accepted as truth and the presumption of innocence is  thrown out the window.