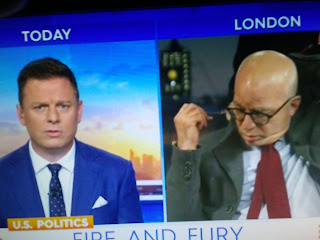 Not surprising since his book has been exposed as a fraud of the first order.

News reports the author of the explosive new Donald Trump biography Fire And Fury has taken his cue from the title and stormed out of an Australian breakfast TV interview.

Appearing in an interview with Ben Fordham on Today, Michael Wolff - crossing from London - was grilled on a range of topics relating to the US President, from gun control to North Korea.
But it was when talk turned to Trump’s alleged infidelities that it all went south.

“You said during a TV interview last month that you are absolutely sure that Donald Trump is currently having an affair, while President, behind the back of the First Lady. I repeat, you said you were absolutely sure,” asked Fordham, who was filling in for Karl Stefanovic.