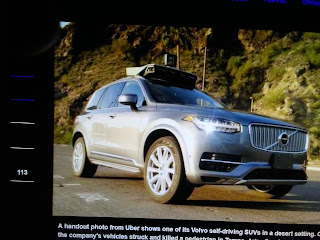 Philosophically I'm opposed to self driving or driverless cars as an affront to our freedom.
The moment we give away our ability to control our own cars to somebody else, we're at their mercy.  That's just dumb!  Driverless cars should be scraped.

NY Times reports Arizona officials saw opportunity when Uber and other companies began testing driverless cars a few years ago. Promising to keep oversight light, they invited the companies to test their robotic vehicles on the state’s roads.

Then on Sunday night, an autonomous car operated by Uber — and with an emergency backup driver behind the wheel — struck and killed a woman on a street in Tempe, Ariz. It was believed to be the first pedestrian death associated with self-driving technology. The company quickly suspended testing in Tempe