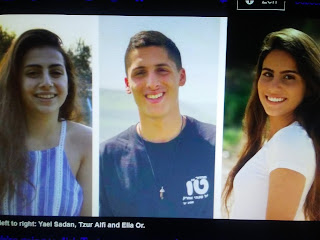 Flash floods are extremely dangerous.  This is so terrible!


Haaretz  reports The hikers, eight girls and one boy of around 18 years old, were part of a group of about 25 who were hiking by a stream as part of a pre-army program

Israeli authorities named the nine teenagers who were killed Thursday when they were swept away by a flash flood during a hike at Nahal Tsafit, south of the Dead Sea.