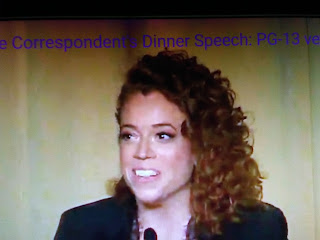 Michelle Wolf said exactly what the organization that hosts the WHCD wanted to say.
Don't believe the lies that she acted on her own.


Washington Times reports the journalism biz had ink on its face after comedian Michelle Wolf’s hard-to-watch attack on Sarah Huckabee Sanders at the White House Correspondents’ Dinner, but there was no apology forthcoming from the organizer.

“What I told you is what I have already told Sarah Sanders, that I speak for myself and the association, and that my interest is in the spirit of unity and in the spirit of serious journalism,” said Ms. Talev on CNN’s “Reliable Sources.”