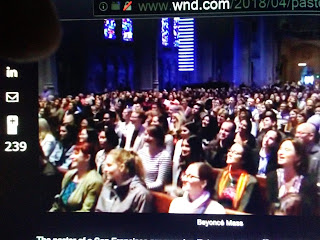 I don't know what the sermon was about.
But, I disagree with this pastor's view that women and people o color are marginalized in Christianity.  That's just not true.

“I know there are people who will say using Beyoncé is just a cheap way of trying to get people in the church,” said Jude Harmon, the founding pastor of the Vine, a ministry of Grace Cathedral Church. “But Jesus used very provocative images in the stories he would tell to incite people to ask hard questions about their own religious assumptions. He regularly provoked.

We’re following in the way of Jesus.”


The event was part of a series the church called “Speaking Truth: The Power of Story in Community,” which it said would tell stories of those traditionally marginalized in Christianity, such as women and people of color. You know, women like Beyoncé.