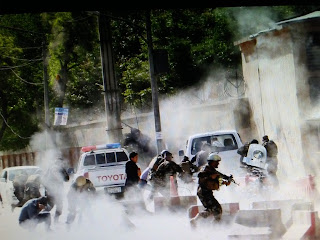 It's still very dangerous in Afghanistan.

CNN reports eight journalists were among 29 people killed in a suicide attack in Kabul Monday, including a famed photographer who had written of the dangers of reporting in the Afghan capital.

The journalists died when a bomber disguised as a TV cameraman detonated a second bomb at the site of an earlier explosion.

The first blast happened at around at 8 a.m. local time in the Shashdarak area of the city, where the US embassy and Afghan government buildings are located, prompting journalists to rush to the scene.