Obama Era Failure: US weapons meant for Syrian rebels wind up in hands of Al Qaeda 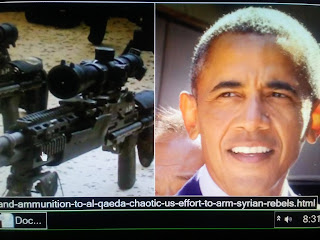 The only thing that kept the bumbling Obama regime afloat was the media that sung it's praises 24/7.
In reality Obama was one the worst presidents we ever had.

Fox News reports  U.S. military equipment and ammunition, sent to Syria as part of a failed Obama administration plan to find and arm moderate forces to defeat ISIS, were instead simply handed over to an Al Qaeda group, according to the man who said he himself brokered the deal.

“I communicated with Al Qaeda’s branch, Al Nusra, to protect and safely escort me and my soldiers for two hours from North Aleppo to West Aleppo,” Maj. Anas Ibrahim Obaid, better known on the battlefield as Abu Zayd, told Fox News from his home in the western Aleppo area. “In exchange, I gave them five pickup trucks and ammunition.”