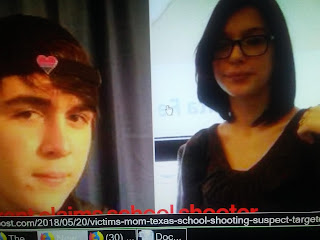 I remember after a another case a parent of a child who got killed said, "He was only a teenager!"
It's my opinion that teens are the most dangerous and what happened in Texas is what I mean.

NY Post reports admitted Texas school shooter Dimitrios Pagourtzis killed a girl who turned down his advances and embarrassed him in class, her mother said.

Sadie Rodriguez, the mother of 16-year-old junior Shana Fisher told the Los Angeles Times her daughter “had four months of problems” with the twisted killer.

“He kept making advances and she repeatedly told him no,” the mom wrote in a Facebook message to the paper.