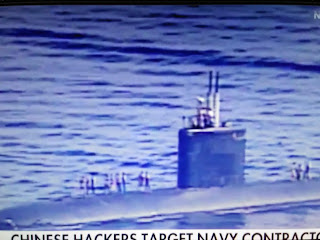 This is unacceptable and needs to be cleaned up.

Fox News reports a series of cyberattacks sponsored by Chinese government hackers earlier this year infiltrated the computers of a U.S. Navy contractor, allowing a large amount of highly-sensitive data on undersea warfare to reportedly be stolen.

The breaches, which took place in January and February, included leaked plans to develop a supersonic anti-ship missile for use on U.S. Navy submarines, U.S. officials told the Washington Post.

A contractor who works for the Naval Undersea Warfare Center in Newport, R.I. -- a research and development center for submarines and underwater weaponry -- was the target of the hackers, the Post reported.

While the unnamed officials did not identify the contractor, they told the newspaper that a total of 614 gigabytes of material was taken.