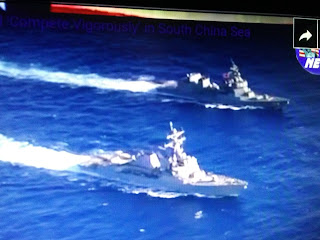 I think China very quickly will learn there's a mew sheriff in town in Washington.
Act up on your own risk!

Wall Street Journal reports the U.S. and China appear to be headed for a more confrontational relationship in Southeast Asia as Washington warns of a more aggressive response to the militarization of disputed islands in the South China Sea.
Speaking at the Shangri-La Dialogue, a regional security conference, U.S. Defense Secretary Jim Mattis warned there could be “much larger consequences” in the future from China’s moves to install weapons systems on islands in the sea. He didn’t specify what the consequences would be.
The warning, in response to a question from an audience member, came after a speech by Mr. Mattis in which he said “despite China’s claims to the contrary, the placement of these weapons systems is tied directly to military use for the purposes of intimidation and coercion.”