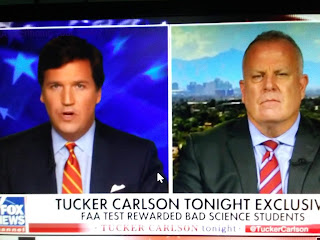 This story is another teachable moment about how Liberals are literally lunatics and should not be trusted In positions of power.

“A group within the FAA, including the human resources function within the FAA -- the National Black Coalition of Federal Aviation Employees -- determined that the workforce was too white,” Pearson told Carlson. “They had a concerted effort through the Department of Transportation in the Obama administration to change that.”