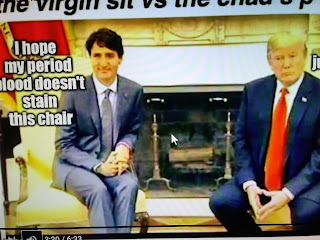 Justin Trudeau is the quintessential Leftist Pajama Boy, a weak sissy-fied male of the highest order.  Take a look of the photo with him and President Trump.  He even sits like a woman, while Trump sits like a real man who has a pair of balls.  If Justin had anything to say to Trump as the G7 he should have said to his face like a ,am.  But, that's not Justin.  See below video to learn all you need to know about Justin Trudeau.

Trump called Trudeau “very dishonest and weak” after claiming that the prime minister had been friendly at the summit only to attack once his back was turned.
Trudeau announced after Trump left the summit that if the United States does not remove the recently implemented tariffs, Canada would retaliate.