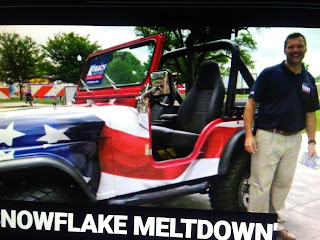 I think it's a cool image.

Fox News reports Republican Kansas governor hopeful Kris Kobach said he won’t “back down in the face of a snowflake meltdown and outrage culture” after being criticized for riding in a jeep mounted with a replica of a large gun at a parade on Saturday.

Koback, the state’s secretary of state, raised eyebrows on social media over the weekend after he attended the Old Shawnee Days parade, named after the Kansas City-suburb.

“Had a blast riding in the Old Shawnee Days Parade in this souped up jeep with a replica gun,” he tweeted. “Those who want to restrict the right to keep and bear arms are deeply misguided. The only thing that stops a bad guy with a gun is a good guy with a gun.”