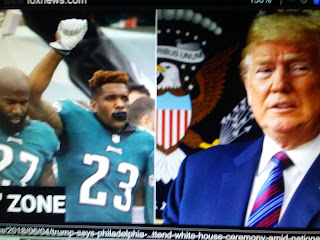 Going to the White House after winning a championship was a privilege, not a right.
It was never seen as political at all.  But, these stupid players seem to think their political opinions matter.  They don't boys!  That's not why fans watch the games.  So shut up and play or quick the game and become a social justice warrior making minimum wage.

Fox News reports President Trump announced Monday the Philadelphia Eagles will not visit the White House this week to celebrate the team's Super Bowl win amid the national anthem dispute.

Trump, in a statement, said the team is "unable" to attend the ceremony because they don't agree with his belief that NFL players should "proudly stand for the National Anthem, hand on heart, in honor of the great men and women of our military and the people of our country."