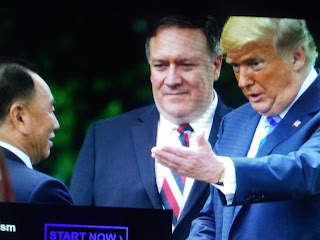 The master of the deal, President Trump, is at work showing the world what a real leader with guts can do.

Chicago Tribune reports ending weeks of uncertainly, President Donald Trump announced Friday that his historic summit with North Korean dictator Kim Jong Un is back on for June 12 in Singapore.

Trump made the announcement, just a week after he canceled the summit, after an hour-long meeting with a top North Korean official who delivered a letter from the North Korean leader.

"Now we're going to deal," Trump told reporters moments after the meeting ended. He also said it was likely that more than one meeting would be necessary. He concluded, "I think you're going to have a very positive result in the end. We will see what we will see."