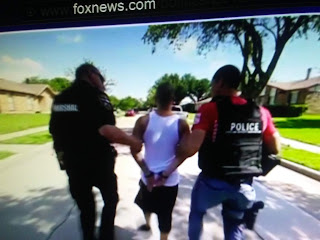 Calls by Democrats to abolish ICE is just insane.
But, I'm glad the Democrats are calling for it because it shows how idiotic Democrats truly are.  The more Democrats speak, the more voters will see they don't deserve to be in positions of power.

Fox News reports President Trump on Saturday defended Immigration and Customs Enforcement (ICE) in the face of calls by some Democrats to abolish the agency, saying the agents are “doing a fantastic job” and that scrapping the agency “will never happen.”
“The Democrats are making a strong push to abolish ICE, one of the smartest, toughest and most spirited law enforcement groups of men and women that I have ever seen,” he tweeted. “I have watched ICE liberate towns from the grasp of MS-13 & clean out the toughest of situations. They are great!”
Calls to “abolish ICE,” once limited to the far-left parts of the Democratic Party base, have shifted into the mainstream of the party in response to the Trump administration’s tough policies on illegal immigration -- particularly the “zero tolerance” policy on detaining all illegal border crossers.